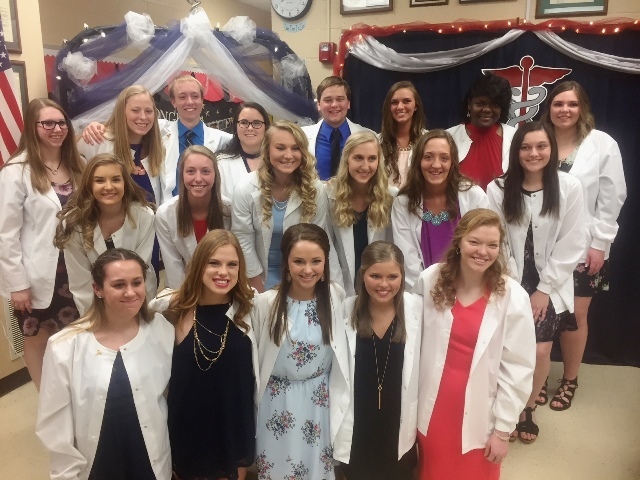 Tuesday evening, April 17th, 19 Med Prep seniors were pinned at Tri Star Career Compact’s annual Med Prep Pinning Ceremony held at the Dennings Building in St. Marys. A large gathering of family, friends and school staff came out to enjoy the ceremony that recognizes graduating seniors for their hard work and dedication to the Med Prep program over the last two years.

The ceremony opened with a welcome from Med Prep junior, Aleigha Jenkins. Rebecca Lehmkuhl, the senior Med Prep SkillsUSA president, spoke on behalf of the seniors, reflecting on their experiences and what they learned in the Med Prep program. A slide show of senior memories and future plans followed and juniors Aleigha Jenkins and Isaac Budde then presented the Senior Superlatives.

Brenda Speck, Med Prep instructor, pinned each senior with a caduceus pin, a well-recognized medical symbol of two serpents entwined around a staff surmounted with wings.The pin is worn throughout their final weeks of observation for the Med Prep class, as well as in their future careers.

Tim Buschur, Tri Star’s Director, presented each graduate with a career passport. The passport is a portfolio which contains documentation of a student’s educational, community and work experience, including a certification of the skills the students have mastered in the College Tech Prep Med Prep program. Seniors were also presented with a red rose, a gift from the junior class.

The evening concluded with a candle lighting ceremony, recitation of the Health Occupations Pledge by students, and closing thoughts from Mrs. Speck.

Graduating seniors and their future plans include:

Rebecca Lehmkuhl plans to attend the University Cincinnati for Nursing